How I photographed the POPE

Let’s break down everything about this photo I captured of the Pope. I want to discuss mentality, gear, settings and the story behind the image. By no means is this the greatest image since sliced bread, it is what it is and it wasn’t easy to capture. 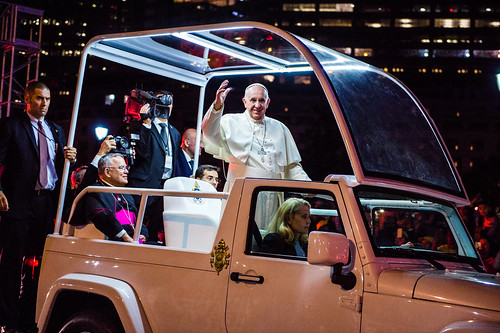 My goal was to capture a photo of the Pope going by in his Popemobile and if he decided to get out of it, hope to get some photos. I had no special access or passes to get the photo I got. Anyone could line up down the parkway which is a couple mile stretch in the hopes of seeing the Pope. All you really needed to do was get there early and wait.

I was roughly four hours early to the spot I decided to pick. You have to know if your goal is to get a specific photograph you better show up early to claim your spot because if you don’t you’re not getting the photo.

The reason I selected this particular spot was there was still a possibility I could be right up against the barricade thus giving me a clean sight line. I have to thank Kim and her mother who came in from DC for allowing me slide in next to them to have a clean opportunity. Another reason this was a perfect spot was the road was narrow. It was only three lanes which means we would be really close.

I made a video discussing what gear I was thinking of taking with me for the day. I decided on the Nikon D4s 14-24, 24-70 and 70-200. Guess what, I did not change my lens once all day, I stuck with the Nikon 24-70 2.8. I am not upset I took the other glass because maybe I would have needed it if a specific photo presented itself.

From what I read the Pope was supposed to start his parade at 5:30 which meant the light would have been really clean. I was preparing my settings for that type of lighting making sure my shutter speed was fast around 1/1000th of a second at F3.5 with a reasonable ISO. This would have been the perfect setting for the situation I was in. A fast enough shutter speed to freeze the action if they so happened to be moving quick.

Word came down that the Pope would not start the parade until 6:50pm. A quick glance at my Apple Watch told me that sundown was set for 6:50pm. This didn’t worry me too much because it still would be bright enough for me to keep a reasonable ISO and shutter speed. Well, the time kept on ticking by and it got darker and darker and we were still waiting at 7:10pm

Now I am faced with pretty much total darkness and stuck trying to figure out how the hell I am going to set my settings to get the photo. Would there be a light inside the Popemobile or would it simply be dark. I checked a photo from a few hours prior when the Popemobile drove by empty to see if there were any lights, I couldn’t see any.

So now I am presetting my camera on a guess. I bump my ISO to 5000, I set my shutter speed to 1/500th of a second and I open up to F3.2. I wont know if these settings are anywhere close until we catch a glimpse of the Pope. Luckily where I was standing I would get to see the Pope before he made it around a circle to pass by me.

The first glimpse of the Pope told us real quick that there were LED lights inside the canopy which where daylight and pretty bright. I left my settings where they were as I thought they would work out. My camera was set to manual exposure, continuous AF with 9 points select and continuous high for my 10 fps.

As I could see the Pope coming out way at a distance I snapped of a quick shot to chimp and check to see if my settings were close and I decided I had to trust them. Oh yea, the Popemobile was moving at roughly 30 miles per hour and he was past us before you could blink an eye.

I like to tell people don’t forget to observe the world around you with your own eyes and let it sync in. To be honest, if I did that I would never have even saw the Pope because he was going by so fast. This is the one time where I can say I am glad I had the photo to look back on because I actually got to see the Pope.

Let me break down the shutter speed real quick. I was at 1/500th of a second. I left it there just in case he was moving fast. Anything slower than that I would risk motion blur as the Pope motored by. Anything fast than that would have meant I had to push the ISO higher or open up to 2.8 which I did not want to do. Yes I could have gotten away with a higher ISO and opened up to 2.8 but I did not want to risk too much noise or missing my focus because 2.8 was to shallow.

I am happy that I was able to get a clean and sharp image like I did. I am sure like always there will be people who over analyze my settings and tell me I should have done a number of things differently. The fact of the matter is I had four hours to debate how I would shoot and two seconds literally to get the shot. This is where preparation, knowledge of my settings and situation allowed me to get the shot.