I want to Mail you this personal letter

It’s always been kind of hard to purchase gifts for me on my birthday. I don’t tend to need or want to many things but prefer personal thoughtful gifts more than anything.

So when my 94 year old Grandfather sent me a pen engraved with Pop pop to Jared I was really excited. It turns out it is a Mont Blanc pen which I have heard of in the past but knew nothing about.

It turns out that they make pens that range from $250 to thousands depending on how many diamonds you want on it. This particular one looks like it sells for around $260 on Amazon. I never thought I would own such a pen but now that I have it I wanted to write something.

So I sat and wrote a letter with whatever was on my mind at the time all while trying to spell everything correctly and make sure I used proper punctuation. It turns out I failed at that slightly as some people have pointed out.

But I got to thinking that not to many people sit down to write letters any longer. So I came up with the idea of having you guys handwrite me a personal letter and post RIGHT HERE as a comment on the facebook post. It must be hand written and you can take a photo of it or scan it into the computer for me to read. I will read them all and chose one person to mail the original letter that I wrote. I will mail it anywhere in the world. 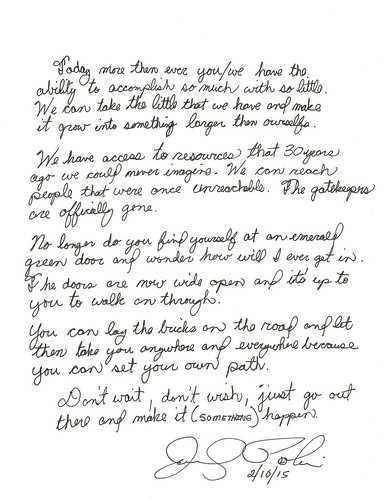