Welcome back to another fun filled week of FroKnowsPhoto RAWtalk. This week we start of with my “whitewater rafting” photos that I discussed last week. We didn’t have an official plug but we discussed Kessler Crane and RedRock Micro both who make awesome gear.

Yup Getty is being sued for 1 Billion Dollars for allegedly selling a photographers work which was donated to the library of congress years ago. You can find all the Photo News stories starting at 21:38 . You will find stories on what Getty Photographers will be using at the Olympics, what $125,000 worth of Nikon gear looks like and that Segate has rolled out 10TB hard drives.

I think many of you will be happy that D d d d d Dan was able to cut the photo news stories right into the video. This is something we’ve been wanting to do for a long time and I wanted to let you know that it will continue to evolve as time goes on.

Don’t forget to hashtag things you feel are hashtagable and leave them as comments wherever you are watching. Please be sure to LIKE / COMMENT / SHARE all of the videos as that helps us reach even more people.

Please enjoy the show and don’t forget on iTunes you not only have RAWtalk Audio but RAWtalk Video now as well.

Adobe has announced that it’s bringing Lightroom to Apple TV. However, you won’t be able to edit with this version of Lightroom, it’s meant more to showcase your images. Adobe says, “Our goal is to make Lightroom the system that you use to share your photos with anyone, anywhere, with the best possible quality, and Lightroom for Apple TV is designed to make that goal a reality on the big screen.” Also, the photos that will be displayed once ‘Lightroom for Apple TV’ is launched will only be the images that you’ve synced with LR mobile or uploaded to the Adobe cloud. In terms of viewing, you can either display your photos via the standard slideshow or by using the filmstrip mode to manually view each photo. Requirements include the 4th generation Apple TV along with a Creative Cloud subscription. Will you be using this on your Apple TV? Flickr along with Yahoo Acquired by Verizon for $4.83 Billion

Flickr was just bought out by Verizon as part of Verizon’s acquisition of Yahoo. Verizon has officially acquired Yahoo’s core Internet Business for $4.83 Billion. Fun fact: Flickr currently has 112 million users and was initially acquired by Yahoo back in 2005 for around $25 Million. The deal will officially close in early 2017 and then Verizon will take over from there. Is this the beginning of the end for Flickr?

Nikon has unveiled the world’s fastest 105mm portrait lens: the Nikkor 105mm f1.4E ED. Calling it, “A marvel of optical precision, distortion correction and craftsmanship,” it features a 9-blade aperture with 14 elements in 9 groups, 3 of which are Extra Low-Dispersion elements. It’ll start shipping in late August for a price tag of about $2200; too expensive or well worth it? Here’s Jared’s preview of the lens:

Speaking of Nikon, photographer John S. Payne shared his massive collection of Nikon gear which totals up to over $125,000. Purchasing his first Nikon camera back in 1975 and running a photo studio since 1985, he’s amassed a ton of gear over the years and has become quite the collector. He shared his recent “family portrait” of his entire collection, which takes up nearly half his studio. He says the collection contains “mainly Nikon F variations as well as 25+ F2 variations, F3 variations, F4, F5, All Nikkormats, Nikon FM, FE, and a couple of V models.” Regarding digital items, he owns an E2 Body and the D1 to the D4. In total, the full collection includes 155 camera bodies, 150 lenses and countless accessories including film backs, motor drives and more. He says the rarest items he owns is a very early Nikon F body along with the 126th F-36 motor drive produced and the four early tick marked lenses: 3.5cm, 5cm, 10.5cm and 13.5 cm. Check out a few images of his collection below: (via PP) On to the Canon side, Getty just released a photo of their insane (rented?) collection of Canon glass and bodies that they’re bringing along with them to the Rio Olympics. Getty Images Director of Sports Events Michael Heiman says, “Getty Images will be capturing a record-setting 1.5 million images at the Games and sending key medal moments from camera to customer in as fast as approximately 120 seconds.” Each Getty photographer will be equipped with a nearly 50 lb camera bag that contains: a 360-degree camera, 4 1DX IIs, a 16-35mm f/2.8, a 24-70mm f/2.8, a 70-200mm f/2.8, a 300mm f/2.8, an additional telephoto lens (400mm, 500mm, or 600mm), 2 flash units, a laptop, and clothes, which totals up to about $42K in each bag alone. Check it out below; it looks to be about at least half-a-million dollars worth of gear no the table. (via PP)

It takes a lot gear to cover the Olympics. This is just some of our lens…. #mygettyriooffice #rio2016 #cps #thankscanon #lotsofglass

In the meantime, Getty is getting sued by photographer Carol M. Highsmith for reportedly $1 Billion. Filing the lawsuit this past week in the Federal Court of New York, she claims they committed copyright infringement through the “gross misuse” of 18,755 of her photographs documenting America. They’ve allegedly been charging licensing fees for the use of her photos without her consent. Here’s the full story: Highsmith spent most of her life documenting America, she then donated those images to the Library of Congress which they say is “one of the greatest acts of generosity in the history of the Library.” The photos are now listed on the library’s website in the public domain with no known restrictions on publication. Getty allegedly picked up the lot of images and began licensing them. She was unaware of this until she got a takedown notice from Getty, demanding that she remove her own photo from her own website because she didn’t pay for it. She claims Getty also sent demand letters to other people using her photos, which again—are in the public domain and not owned by Getty. She says she may have given the photos to the Library of Congress but she still retains the copyright. The lawsuit goes on the read: “The defendants [Getty Images] have apparently misappropriated Ms. Highsmith’s generous gift to the American people, [They] are not only unlawfully charging licensing fees…but are falsely and fraudulently holding themselves out as the exclusive copyright owner.” Highsmith is now seeking that dollar amount based on the precedent of photographer Daniel Morel’s lawsuit against Getty, in which he was awarded $1.2 Million for the infringement of just a single photo. $1 Billion… who do you think will win this case? (via PDNP / PP) Seagate has revealed a new 10TB internal 3.5-inch hard drive. Called the BarraCuda Pro, the drive is a 7200 RPM drive with power saving features. To put in in perspective, 10TB will save up to 125,000 photos if you’re shooting with the Canon 5DS, which has about 80MB RAW files. Coming with a 5 year warranty, it will cost $509 and is available now. Jackie Kennedy’s Leica Up For Auction

A rare Leica is up for sale on eBay, not because it’s a vintage Leica either, it was owned by Jackie Kennedy. Before becoming first lady, she was the “inquiring camera girl” for the Washington Times-Herald. She began her newspaper career at age 23 in 1952. The actual camera she used while on assignment—a Speed Graphic press camera—isn’t for sale, but a few other items once used by her are. The listing includes a Leicaflex SL SLR with a Leitz Wetzlar Summicron-R 50mm lens—this might have been more her personal camera. As proof, the seller supplied photos of the camera in her hand too. They’re asking $8,995 for the kit which you can find here if you’re interested. The camera was originally acquired from an auction at the Kennedy family homes back in 2005, and the original auction receipts are also included in the sale. Now’s the time to own this piece of history… (via PP) 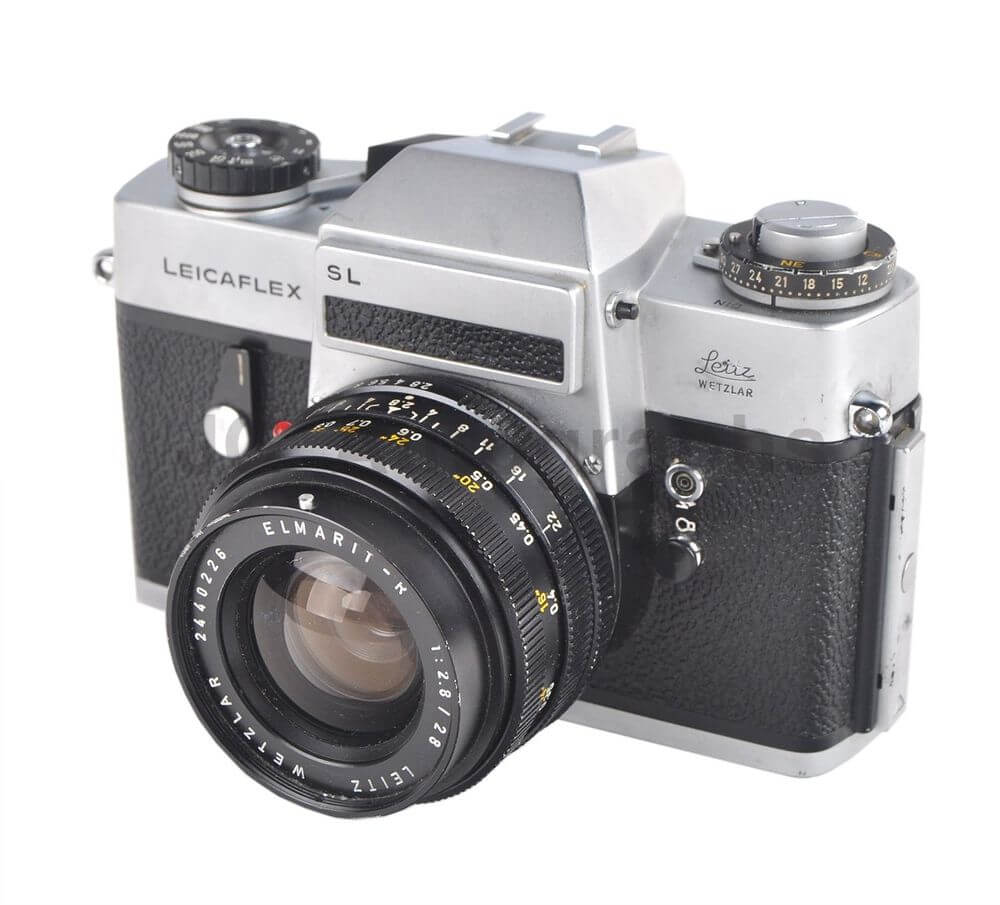 A new world record has been set for creating the world’s largest contact print ever made. A photography group called Branco Ottico used a 24-square meter negative and a canvas of the same size to create the world’s largest cyanotype contact print. They say, “We chose the cyanotype as printing process due to its ease of realization and cheapness, the salt used to sensitize the canvas have in fact affordable costs, and this would have made the difference given the final dimensions of the work.” The group’s main goal is to, “break up the unnecessary cultural and artistic barriers of the contemporary photographic era based on means, fashions, and 5 seconds of social fame,” which is exactly what this project did. Using the sun to expose the print, it took about 12 minutes and 30 seconds to create. Since the print is so large, they enlisted the help of people walking by to unroll the canvas. While doing so, they asked the participants to place their hands around the edges and “make their mark,” which resulted in several hand prints around the frame in the final image. They note that, “The idea of letting people leave their sign all around the picture with their hands was born during the design phase and we thought it was essential for the brotherhood message.” Once the exposure time was done, they quickly ran to wash and “fix” it. They have a whole 10-min mini-documentary about the experiment which can be seen below. I want to note that this took place back in September of 2015 but for some reason they just posted the behind-the-scenes video this month. (via PP)

Wedding photographer CM Leung did a shoot in Iceland with a bride, where suddenly a rescue helicopter flew over her, nearly hitting her in the process. The downdraft threw her off balance, almost sending her to the ground. The photographer notes that it was not a planned part of the shoot. It turns out the helicopter had been in the area to rescue a man who had fallen down a cliff nearby. The Icelandic coastguard says the helicopter didn’t fly directly over the bride and was at a relatively safe distance away, although video footage of the incident which can be seen below shows otherwise: (via PP)

After DJI revealed their new 7x zoom payload last week, there’s now a new drone that features a 16x optical zoom—that was fast. Called the Voyager 4 by Walkera, the drone has a max focal length of 1500mm and is gimbal-stabilized. The 16x zoom version only records in 1080P though, but they do offer a 4K-shooting version which comes only with a fixed focal length lens. Other specs include the ability to control the drone from a mile away with the drone’s own WiFi network. It also has 4G support so it can de controlled from anywhere with a 4G signal, which is practically everywhere. No word on the price just yet, but the current Voyager 3 model sells for $2000 so it’s expected to sell for around that price point. Check out the promo video of the drone in action below: (via GM)