After my Google Meetup in Israel which saw 200+ readers show up I wanted to capture a group photo. Lucky for me Benjamin Von Wong was on the trip with us and is a master at figuring out how to light in difficult situations.

Ben spent the better part of an hour trying to figure out how he was going to capture such a large group photo. I put my full faith in him to figure it out and he knocked it out of the park.

He used the large windows running across the front of the building as fill light. He set up two of his Broncolor’s, one bouncing into the ceiling from the front and the BIG ONE in the center of the photo behind my head. His idea was to have me stand up on some thing and have the big flash light up the Fro from the back.

Mind you we only had a few minutes to take this photo. Ben took the first few but handed it off to someone else so he could join in the photo below.

Now that we have this RAW file I thought it would be fun to share it with you guys as a DNG to see how you would edit it in Adobe Lightroom. Will you crop it like Ben’s edit which is posted below? Will you dodge and burn everyones faces to make the lighting perfect? What will you do, CLICK HERE to download the RAW FILE. 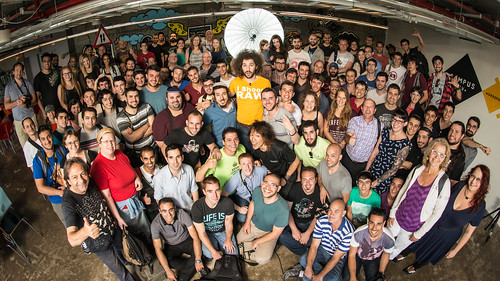