The big question since the Sigma 50mm F1.4 ART and Zeiss Otus 55mm F1.4 were announced is which is better. The Sigma clocks in at $949 which is pretty expensive for a third party 50mm F1.4 lens. The Otus on the other hand clocks in at an astronomical figure of $3990.

First off we have to acknowledge that the Sigma is a 50mm and the Otus is a 55mm. But for comparison purposes they are pretty much the same focal length.

If we take a quick look at the other 50mm F1.4 lenses on the market, the Nikon and Canon both come in right around $400. Have we ever seen this to be the case, where a third party lens like a sigma costs twice as much as a first party Nikon or Canon?

As many of you know my type of reviews tend to be on the more practical side. There will be no charts shot, there will be no pixels peeped, just personal observations and sample images for you to do as you please. I leave much of the review open to your personal interpretation of the results I found.

When you put the lenses side by side you can clearly see that the Otus pretty much dwarfs the Sigma. In the weight test the Otus comes in noticeably heavier than the Sigma. If you are one of those people who tries to shave weight off their gear you wont like to cary around the Otus. In my opinion I never shop for a lens based on its weight, it always comes down to the quality I will get out of it.

I am going to skip the wind tunnel test for the written portion because you can see who wins in the video.

For my test of the lenses I chose to use the FroKnowsPhoto Bobble Head as the main focus and my Tetris Lights for the out of focus Bokeh area.

The goal with this test was to fill the frame as tight as possible and at the closest focus while leaving enough out of focus area on the side. Keep in mind the Sigma is shorter than the Otus so the images will not be exactly the same. 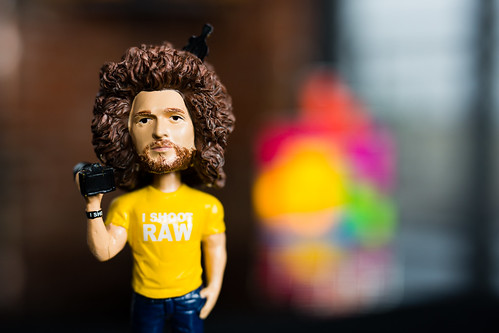 I took test shots from F1.4 all the way up to F16 for with both lenses. This will give you the ability to see how each aperture effects the focus and out of focus areas.

Before we get to far into the side by side comparisons of the images I must point out one major issue I had with the Otus and that came in the Auto Focus Test. The Otus scored a 0.0 on the Autofocus test because it does not Autofocus at all. The Sigma WINS this round hands down.

I personally do not have the sharpest of eyes which makes manually focusing almost impossible for me. This is something you must take in to consideration before you purchase the Otus.

When you look at the image below which is a 1:1 crop of the F16 sample images, it looks to me as if the Otus is slightly sharper and more defined in the shadow areas. But the question is, is it that much of a difference that to warrant a $3,000 price difference. 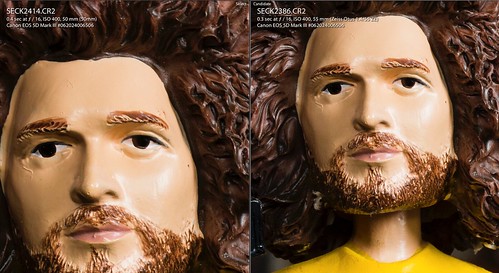 I did my best to give you some real world sample images from outside before the storm rolled in the day I was doing the review. It’s always important to do a close focus test so you can see how close you can get to a subject. It’s also important to shoot something like a brick will with straight lines to see if there is any bowing or issues around the edges. Again I leave you the sample images to decide for yourself.

The big question is which lens WINS. To be honest I am sitting here writing this review and I don’t think it’s even close. For how sharp and amazing the Zeiss Otus really is I can not justify spending $3,990 for a 55mm F1.4 that does not even Auto Focus. For money like that you can purchase two amazing lenses out of the Hebrew Trinity on both Canon and Nikon.

It comes down to practicality and functionality and the Sigma 50mm F1.4 ART definitely has that over the Zeiss Otus. It is sharp, clean, fast and it has Auto Focus.

The secondary question than becomes is this Sigma worth spending $949 on? For me personally the answer would be no. I don’t shoot a lot with fixed lenses and on the flip side I don’t know that you will see a noticeable enough difference between the Nikon and Canon 50mm’s. But I wont know that for sure until I put the three lenses up against each other.

In conclusion you have to ask yourself do you need either of these lenses? What will you use it for, do you need auto focus? If you are shooting in a studio environment and sharpness is of the utmost importance the Otuss could be for you. If you have an unlimited amount of money and simply want to have the most expensive 50mm you can find, than the Otuss is for you. For me I will end up passing on both of these lenses.

Thank you to AllensCamera.com for allowing me to conduct this test. If you would like to purchase either of these lenses please click the corresponding links. Zeiss Otus Sigma 50mm F1.4 ART Lens.